Nel is one of the protagonists of the Aoi Sekai no Chūshin de series. She is based off of Nei from Phantasy Star II.

Nel appears quite shy and has long purple hair and blue eyes. She wears sweet and cute clothing that reflects her personality. Like a purple tube dress and tan waist scarf along with gold Bracelets on her left arm and an armor-like glove on her right arm. She also wears a tan choker

This section of the article is a stub. You can help by expanding it.

Nel is timid and shy to most, but when she starts getting into a conversation, she opens up quite a bit. She doesn't talk very much and she has phobias for just about everything. She does love to read and write, though, and is very smart and intelligent.

This section of the article is a stub. You can help by expanding it.

This section of the article is a stub. You can help by expanding it.
Well first she went and battled the legendary kthulu and lost him ravaging her repeatedly after her defeat after that she gained power by the kthulu accidentally leaking some of his power into her, immediately after she killed the kthulu and took one of his teeth and made a weapon out of it. Nel is Gear's Younger Sister and a friend of Til. Nel mourns on the lifeless Til after his death.

Originally, Nel did not have any known powers and was more of a cheer leader for Gear; but when Tejirof was training Gear and Opal, he revealed that she was a "Killer" with the power to hear and see things better than others. This is power was known as "Online", it is a reference to multiplayer games and the ability to connect with people far away. A fourth wall joke is made by Tejirof, where he says that it will be useful in the future. A reference to how games now focus alot on multiplayer now. She has a claw she wears on her right hand, which is a reference to Nei's weapon in Phantasy Star 2.

Nel in the manga. 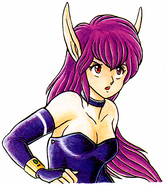 Nel is based on Nei
Add a photo to this gallery
Retrieved from "https://aoisekai.fandom.com/wiki/Nel?oldid=5263"
Community content is available under CC-BY-SA unless otherwise noted.